With the passing of the Dick Smith CRO and the unsuccessful resurrection of another CRO that I rescued out of the work skip I have moved on to an LG CRO! 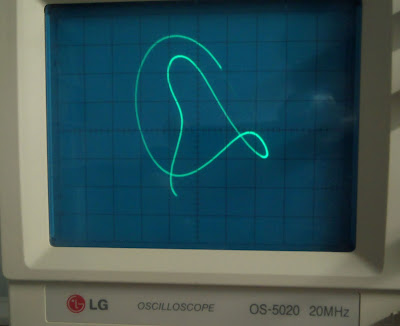 Posted by Hotlblack Desiato at 6:41 PM No comments:

Have been designing some PCB's that I am going to have to get made... This is beyond the Press'n'Peel limitations... I am trying to make it compliant with DIY but there are going to have to be surface mount parts as the processors just aren't available in through hole. I suspect that it will still put people off but... I must admit that looking at some peoples handy work I am still amazed at how bad some of it is! On the flip side some of it is totally amazingly neat need as well... Looking at only using parts in 32pin QFP and 44pin QFP -- these are the only parts that have a 0.8mm spacing instead of the more common 0.5mm spacing. I have sort of got use to the higher density but I can see how it is a bridge too far for some people... There are significantly less parts available in those packages and perhaps more importantly significantly less on-chip-memory... This is a bit strange since the actual package size is still the same as 48pin/0.5mm QFP which seems to have truck loads of RAM... oh well we will see where this leads us... 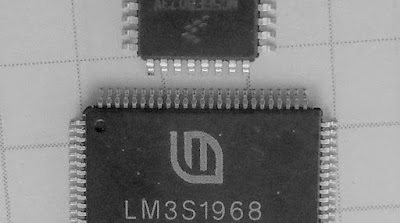 Posted by Hotlblack Desiato at 6:36 PM No comments:

Onwards and upwards... Whilst eating my sandwich at lunch yesterday I was reading about other Attractors and came across a lot of references to Sprott's Chaos and Time-Series Analysis book. Having the advantage of a child at University I e-mailed him and he borrowed it from the library. Probably a few orders of magnitude over my head for most of it, it did clear up the differences between flows and maps (which is obvious after the fact) and has a fantastic appendix full of different formula for common chaotic systems. 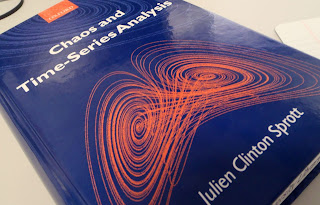 I have added quite a few to the formally called Peaks board and code stream. The one I like the best is the Halvosen Attractor which, for quite a simple formula, has a bizarre thrashing around like a cat in small cage! Here is a quick photo from my least favorite CRO (since the Dick Smith one seems to have died from dry electrolytics)... 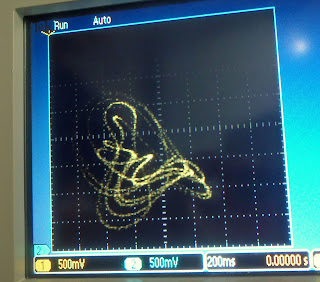 Well made even more hatchet work on the code... Have been building for both Keil & IAR as developing on two compilers does sometimes show up issues in the code and how the different compilers work. I made a FixedPoint class to make the code a bit less messy and hopefully it will also support seamlessly moving to a floating point compliant processor... It did show up a few things that had me scratching my head a little bit. Oliver's code has some casting that I thought should have been unnecessary... When I implemented the class I found that it wasn't just the multiplies that needed to be 64bit and that the compiler was smart enough to keep some of the other maths at 64bit to stop wrapping... FixedPoint class got more complex... Anyway all works nicely now and have thrown a few extra chaos modes into the mix... This being the Rössler attractor: 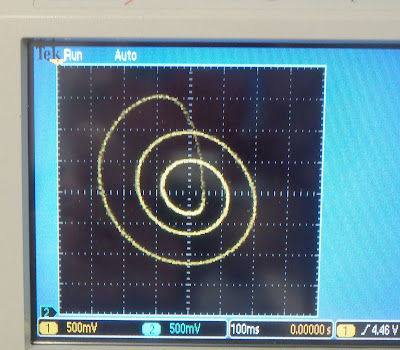 Posted by Hotlblack Desiato at 12:05 AM No comments: 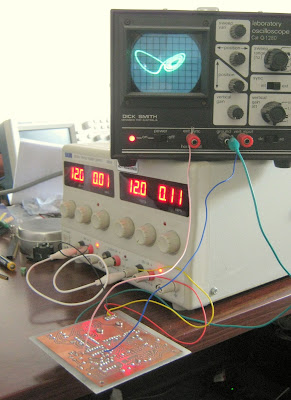 Well stuff is happening now! The Peaks code is starting to bear little resemblance to the original but that is what open sauce is all about I suppose -- different processor, different compiler, same language and core... Lissajous figures always look the best on an Analog CRO so I dragged out my Laboratory Oscilloscope that I got while at WAIT and had some fun with the Lorenz generator that was actually from Streams originally. I have a few more  Chaotic generators to try...
Posted by Hotlblack Desiato at 7:55 PM No comments:

Well not the fastest progress but: 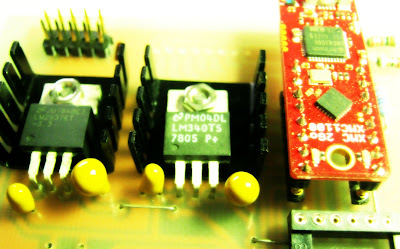 Posted by Hotlblack Desiato at 5:50 AM No comments: